I first met Gloria Zachgo at a Kansas Authors Club convention. She was a new author with her first published book in hand. Since I have always been intrigued by the story behind my favorite stories, I thought I’d take this opportunity to interview Gloria about the process of writing her book. 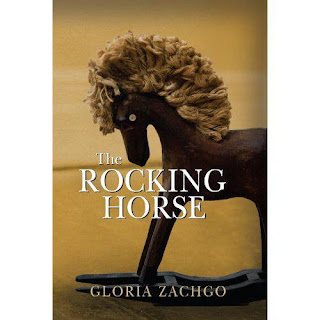 Tell me about writing your story.  How did your book come to life?

I’m in a writing group that often writes on prompts.  It was one of those prompts – a little toy rocking horse and a gingerbread man – that led to a story.  After I wrote the story I filed it away in a notebook and didn’t think about it again until I took a writing workshop.  Driving home from that workshop my rocking horse story kept coming back to me.  I saw a young woman in a small town walking down the street, all alone.  The local sheriff saw her and was shocked – but why?  She wasn’t a local, yet he thought he knew her.  With inspiration from the workshop, I started writing so that I might know the answers myself.  Ironically, the finished book and the original story are nothing alike.

Who is your favorite character in your book and why?

Probably Barbara – because she reminds me so much of my own mother.  But that  question is really hard to answer, because each character became real to me.  I love developing characters, from people I’ve met and known, and even strangers that I’m just curious about.  I was told I even made Blaze likeable.  It was easy to do that, because every dog I’ve ever known has its own personality traits too.

Were there any characters who surprised you?  Characters who didn’t end up being quite what you thought they would be when you started writing your story?  Tell me about how they changed.

All of them changed as the story developed and they became more real.  But Katherine was the one who changed the most in my own mind.  She started out cold hearted.  Then she became vulnerable and a softer side started to come through.

When writing The Rocking Horse, did you outline and then write, or did the story develop chapter by chapter?  Did you know when you started where you were going to end up?

No, I didn’t know where I was going to end up as the story kept changing with the development of each new character.  I didn’t use an outline for The Rocking Horse.  I  titled each chapter, so that I after I’d completed my manuscript, I could weave them  together into the book.  I made an epilog on the first try.  It didn’t work right.  When I tried again, I ended with a chapter that might let me go back to Shady Creek someday.  That’s not happening yet.  I have another story to tell now – totally different than this one.  I’ve had a lot of requests to find out what happened to several characters (especially Larry).  I hope I get the opportunity to visit them all again, but for now I have to write what’s in my heart.

Gloria Zachgo grew up on a farm in a small Kansas community where neighbors were friends and family.  She rode her horse Nellie over pastures where the buffalo once roamed, and she attended one of the last one-room schoolhouses in the country.  Is it any wonder that she loves nature and her own independence?

Gloria married her high school sweetheart shortly after finishing business school.  They lived out of state for a short time.  When they found their way back to , Gloria ran a small business out of her home while her children were small.  When the kids left home, she pursued her interests in painting and later in writing.  When she joined a local writer’s group,  she explored writing fiction, and knew she had found her true love.

Gloria told very few people that she was writing The Rocking Horse.  Writing in the early mornings after her husband left for work, she spent nearly a year working on the novel.   When she had a completed manuscript, it was a surprise for her friends, family, and her weekly writing group, and when she shared it with them, they encouraged her to get it published.

The Rocking Horse was published in 2011 and has recently won “Honorable Mention” in the 20th Annual Writer’s Digest Self Published Book Awards.

The Rocking Horse can be found at: